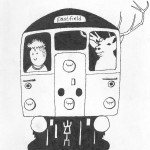 TrueTrash: For all our readers who don’t already know you: Can you give a short description of Eastfield?

Jessi: Eastfield are a proactive DIY band based in Birmingham, UK. The industrial sprawl of the area provides a fitting background to churn out what people have labelled ‘rail punk’ – a high speed blend of tuneful, catchy sing-a-long songs influenced by tales from the marshalling yards and shopping precincts of the world.

As Fabian and other reviewers often point out, the appeal of Eastfield draws on it’s two main strengths: the clever use of dual vocals and the quality of the lyrical content. The songs are liberally dosed throughout with a unique blend of humour and politics, which is in turn interspersed with obscure but highly relevant references from the world of popular entertainment, railways and first hand experience. This is done without compromising the corresponding aim of keeping the songs straightforward and accessible.

TrueTrash: You have a female background singer, which makes your music something special in comparison to other punk bands. Planned or just a lucky accident?

Jessi: Women have been involved in Eastfield from fairly early days, I do like dual male/female vocals in songs if they are done well. Several people have compared us to the Rezillos which although is a good compliment, I don’t see this myself. In fact, like a lot of things in Eastfield it definitely wasn’t planned and happened more ‘organically’. We were originally a 3 piece, Elaine was an old friend that used to share a house with us, was very supportive of Eastfield and eventually plucked up the courage to ask if she could sing with us. We’re up for giving most things a go, so thought ‘why not’. Admittedly, at first she didn’t do a great deal but at least by the time we recorded ‘Keep it Spikey’ (1st album), the extra vocals had become an integral part of the Eastfield sound. Since Elaine, Kerry joined for a short while and now Trina has been in Eastfield for nearly 8 years. It definitely boosts the sound. People always say the 3 voices in the band work really well together. Besides, the more other people sing, the less I have to do!

TrueTrash: The last Eastfield release is from 2009. Is there already anything new planned right now?

Jessi: We have just released the new album ‘Detonation Junction’ which we are very pleased with. Early reports say it is the best thing Eastfield has ever done and I’d go along with that. The last full album ‘Express Train to Doomsville’ dates back as long ago as 2005. When a band is constantly playing gigs it is hard to find time to write and rehearse. As songwriter, with a busy life both in and out of the band I rarely get a chance to pick up a guitar outside of doing gigs. I cannot write on demand and the more I worry that I should write, the less I am able to do it!!! We also had a seriously ill drummer for a while which meant we were unable to record over a 2 year period. But ‘Detonation Junction’ is well worth the wait.

TrueTrash: Many bands are releasing their tracks only on CD. You have published some vinyl records over the years. Personal affection or a gift to your fans?

Jessi: Eastfield formed in a time before CDs were widely available. Like loads of bands, our first release was a cassette tape and then we put out a 7″. It was something that we’d always wanted to do and we thought it quite a personal achievement. Subsequent 7″s have been put out by/with small labels and friends that have wanted to do them.

CDs are cheap and easy to put out and lots of people have never owned record turntables or no longer have them. There is, however, still some demand for vinyl and those that are very enthusiastic about the format. You get a lot of vinyl collectors especially in the punk scene. Although it is interesting that the vinyl market in the UK was actually kept going by the popularity of dance music and DJs.

We have put the latest album out on 12″ vinyl. We didn’t know whether this would be a good decision, at least financially. But it has been selling well and it looks great!

TrueTrash: Eastfield is on stage since 1996. Are you still performing with the same fun? Isn’t it boring to play some songs for more than 15 years?

Jessi: We are probably performing with MORE fun as the band has totally grown into it’s own over the years. A lot of people have commented on the ‘Eastfield feelgood factor’ where the band gives a room or a venue a lift. If we are seen to be enjoying ourselves, then the crowd enjoy themselves. If the crowd enjoys themselves this will rub off on us too. It is very infectious. I guess that’s how raves work…a room full of people happy and smiley and everyone goes away having had a great time.

I agree that it can be stale to play some songs for a great length of time. Our current set is based around the new album, with other newer songs and a few old ones thrown in. There are many songs we like that we haven’t played for years that we’d perhaps like to revisit live one day. It would be good to play some of these and make them sound fresh again.

TrueTrash: Isn’t it frustrating some days giving the best on stage just for a precious few people in the audience – at least in Germany?

Jessi: Similar to what I was saying above, I think a band should always give 100 per cent when they are playing. This is so the band and the audience get the most out of the evening. Sometimes our concerts are busy, other times we may go to different places where people haven’t heard us before and there may be only 30 people there. You still have to play your songs, so you might as well play your heart out to those 30 great people who have bothered to turn up to ensure that they have a good time and go away happy. This is important. Next time they will come back with their friends too!

TrueTrash: For me „Another boring Eastfield song” is your best tune. Do you have a favourite song you like performing most? Or has your best song still to be written?

Jessi: Surely all the songs sound the same, so they are all our best songs (joke!). We have ended the set with ‘Another Boring Eastfield Song’ for many years now and it always goes down a treat. To this extent I like playing it, and because it is tongue-in-cheek celebrating our attitude to song writing. A set wouldn’t be the same without it. At the moment I like playing the songs from the new album, especially when the band is locked in our groove. ‘Train to the Top of the World’ is another one I like playing….it drops the pace a little bit but is still fairly full on.

TrueTrash: Can you remember how many songs you have released since the Eastfield kick-off? Or how many live-gigs you have played?

Jessi: Gosh, I could look at our CDs or the website and count them. I’d say it was about 80 songs and 900 gigs but I could be well wide of the mark on both. They’re all listed on www.eastfieldrailpunk.co.uk If someone does count them, please can you let me know!

TrueTrash: Thanks a lot for answering our questions!

Jessi: Thanks for the interview Fabian. Good luck with TrueTrash.