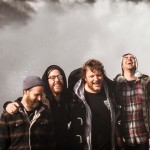 For the ones who don’t know you, who are The Smith Street Band? We are four guys from Melbourne, we’ve been playing as a band for about five years and it started as a solo project, Wil Wagner, the singer and guitarist, was playing solo acoustic shows about five years ago and also had written our first album solo and then decided to do a backing band. Very quickly it became an actual band, we went from there, we started touring Australia straight away, releasing music as much as we could and then as things went on we had the chance to start touring different countries, go overseas a lot. That’s who we are I guess, some sort of Indie-Folk-Punkrock-Whatever.

In fall you released your third full length Album Throw Me In The River, what have the reactions to it been like so far? It’s been really great, most people said they like it, it was very good received in Australia, too. We got some things we didn’t expect, for example we got into the Top Twenty of the Australian Album Charts. It’s really nice to work super hard on something and then have people who like it. To me the most important part is that our friends and other musicians, so people you respect, like it because I think those are the people who are really honest.

Is there anything special to tell about it? The way we did it was quite unique. In winter, we hired a little house in a small town in the middle of a forest, it’s even named forest, to record it. Jeff Rosenstock who played at Bomb the Music Industry came over from New York and produced the album. Our friend Sam Johnson, who had done the last album, was in the process of building a recording studio but didn’t have the space so we brought it to the house. So we spent a month and recorded the album, lived there, having open fires, cook each other breakfast, that was really great.

Did your cover fotograph occur then, too? Yeah, that’s probably the best part about it. Each night, when we finished recording we went to the local pub to get something to eat, maybe some beer, so we got to know the people living there quite quickly and actually became friends with some of them. Towards the end of the recording Jeff and Will decided to do a solo Show at the bar, we announced it on Facebook so even some of our friends came from Melbourne and after the show we had a bonfire at one of the local’s houses and our friend andy took that fotograph.

Although most of your lyrics are rather personal than political you’ve put out political statements several times. Why do you handle it that way? I can’t speak too much lyrically because Wil writes the lyrics but if I was to speak for him I would say that he always speaks his mouth on what he’s passionate about. A lot of the time the lyrics are concerned with his own issues but he also is a very intelligent and politically minded person.

Some weeks ago, you did a Facebook post naming sexism as a problem. Did you experience sexist incidents on your shows yet? We hald a couple of incidents yet. Unfortunately it’s never been brought to our attention to the specific time but some people wrote us after the show. That’s horrible, we don’t want that at our shows, we don’t want sexism and violence on our shows, that’s not what it’s all about. The reason we spoke out about it is that two days after we finished touring with them our friends Jeff Rosenstock and Chumped played another show and there’s been an incident with girls being inappropriately touched and they spoke out about it. Music is about celebrating life and individuality and anybody should be able to feel safe and welcome. When someone is unwelcomingly affecting that persons experience that’s not okay. It should be common sense to most people. As a band we would be wrong not to say something

You also released the EP Wipe That Shit​-​Eating Grin Off Your Punchable Face this winter, could you please re-tell the story behind that release. Thats something we are all passionate about. I guess our government has done a lot of thing we don’t agree with but this is a big humanity issue and people are dying because of it. I think when we have a song like this, the least we can do is trying to use it to help some people. We already recorded it when we recorded the album, the only point why we didn’t put it out was that it didn’t really fit in there as it would have been the only political song. We got together with our friend Tom who runs an annual show to raise money for refugees so he asked us to play there. At the same time we thought that’s a great opportunity to put out the single. The show raised more than thirty-thousand dollar and the single raised about ten thousand dollars. We’re really humble being a part of this. The greatest thing about it was that my parents event called me and said they read about it in the newspaper so we reached our goal and made people know about that issue.

From Melbourne to the US and Europe. Isn’t that a bit weird? It’s a long way. Since the end of January we did an Australian tour, then we had ten days off and did an US tour, then we had another ten days of and now we’re doing an European tour. It’s very hard and rewarding work and the amount of bands from where I’m from is very slim. I feel like we tried as hard and as well as we can and we’re very happy to be here. We’ll come Back to Europe in August, we were here two times last year so… yeah. Well to put it in perspective, I’m twenty eight years old now, before I started playing in this band I’ve never been overseas at all, now we’ve played the US three times, Europe four times, we played China, all of these places. We got to all those places thanks to being in a band.