Interview with The Sensitives 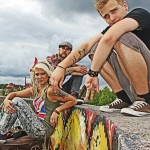 Last week, we already reported about the great gig by the Sensitives in Munich. Now, the band agreed to answer some of our questions. Thanks to Sweden.

TrueTrash: You are a quite young band from Sweden. Can you tell us something about your beginnings?

The Sensitives: Yeah, we´re just about 6 months old!
It started when a friend of ours was making a compilation CD (Music for tree climbers) and asked if I wanted to be on it with something.
I had a couple of songs that didn´t fit for the band I was curently playing in and recorded them with Anton on drums and Paulina on bass and vocals.
Things felt really good and it felt very natural to make a band out of it!

TrueTrash: The Sensitives’ first album has been released in 2011. Is the feedback as you expected it?

The Sensitives: We released the EP Weird Things Happens at Night and got very nice feedback to it!
We had a day off on the tour that we spent in a studio and recorded the drums, bass and guitars for a full length album to be released in spring 2012.

TrueTrash: Does your private live influence your music? Or are there any musicians which inspire you?

The Sensitives: I think in some way every songwriters private life influences the music.
For my self I try to write music that makes me think of better things in life than all the crap that´s going on everywhere, even if the songs sometimes is about just that.

I get very inspired of musicians that can play a song like it´s the last song they´ll ever play and can make you feel it for real, without any plastic acting.
Against Me! is the greatest example of that.

Also every band that can make an whole audience feel good during a whole show, like many good ska bands do night after night!
Our first show ever was togeather with Escandalos in Ulm and it was really great to see how the audience reacted to their show and that is something that inspires me alot.

TrueTrash: You are on tour right now as the support act from “Mr Irish Bustard”. How did it come to that collaboration?

The Sensitives: Actually we´re on tour on our own, the show with Mr Irish Bastard in Munich was just a one time thing.
We have a very great friend in Germany, Christian Jerg who is the singer in the ska-punk band Escandalos.
He is helping us out with bookings and all kinds of things and he got in contact with the booking agency for Mr Irish Bastard and somehow got us in for the show.
This whole tour is possible just because of Christian!

TrueTrash: Those gigs right now are your first ones in Germany. Satisfied with the peoples’ responses?

The Sensitives: Actually we did our very first gig in Germany in September, at Hemperium in Ulm.
We were very happy with the feedback from the audience and also during the tour it has been really good!

TrueTrash: Are you planing gigs on other countries than Sweden and Germany?

The Sensitives: On this tour we did one show in Czeck Republic as well.
We´re curently planing the touring for sprin 2012 and hope to include some more countries around Germany.
We really wanna go everywhere but we have to start somewhere!

TrueTrash: What was the worst/ greatest happening on stage?

The Sensitives: When we came to Ulm for the first show it turned out that very many people really liked a song called Weird Things Happens at Night that was on the compilation CD but we never learned to play it because it´s recorded in a pretty strange verision and we never really figured out how to play it as a trio.
So when the show was over the audience screamed for more and for that song so we really felt we needed to play it.
So we played it with just guitar, vocals and tambourine and it sucked really bad since I never played the song really since we recorded it some months earlier.
When the song was over the auidence kept singing the chorus on and on and since it was a pretty small place and people all over we couldn´t really get of the stage and couldn´t do anything else than stand and watch the people sing the song.
That was the best feedback for a horrible played song we´ll ever get I think!

TrueTrash: What are you plans for the future?

For more information and nwes check the band’s website http://thesensitives.net/news/category/news


One Response to Interview with The Sensitives