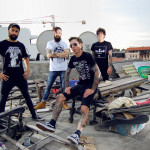 I am…Ishay Berger from Useless ID.

I would never ever…Get to see The Ramones.

I would instantly…Do, If I only could.

In my next life…I hope I can still keep Lital – My girl from this life.

If only I had known…I wouldn’t sell my blue vinyl of “Dear You”.

It is long overdue…Finish Hardcore is The best.

Sex, Drugs & Rock’n’Roll…Rock’n’Roll should come before drugs, sex can stay there though.

The first record in my collection…Either Eurythmics Or Talk Talk – Hey, YOU asked!

A band worth seeing live…Not On Tour from Israel.

The best show we ever played…It was real cool to play The palladium in L.A with The Vandals, Lagwagon and The Ataris in the year 2000.

The worst show we ever played…12.31.98 in Tel Aviv, We even wrote a song about it, called “Out Of Tune”.
The best thing in our band history…Getting on The Fat Wreck Chords Label.

The worst thing in our band history…We played a festival in Italy in 2005 which was the last day of our tour…We stayed for the next day because We thought it would be fun, but then had nowhere to sleep so We just walked around until We all snuck into complete strangers tents…in the following day We could not enter back to The Festival…it sucked so bad.

Looking back…We’ve seen a lot of things change and yet stayed true to who We Are.