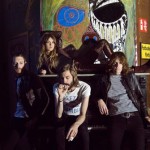 I am… Johnny Hoyles guitarist in Spiders.

I would never ever… lie….

I would instantly… jump at a chance to tour South America. I’ve never been there but it seems very exciting and has great wild life and culture. I really like a band called Pascado Rabioso and I think they are from Chile. I have friends that have toured there and it seems a bit dangerous in some countries but as long as one is careful I suppose.

In my next life… I don’t believe in a next life. We only have one chance so it‘s best to get as much out of life as possible.

If only I had known… that things just gets better. Forming Spiders and getting to play with ones best friends, it dosent get better than this.

It is long overdue... that we have done a European tour. Fortunatley we are supporting Graveyard on a three week tour in December. We are playing Germany, Holland, UK, and Austria. It’s going to be a blast!

A band worth seeing live... Goat, a new band from Gothenburg Sweden that play a mix of afro rock folk and psychedelic music. They have just released an album called World Music and it‘s brilliant.

The best show we ever played… was at a small club out in an industrial estate in Gothenburg we had just been picked up in a mini car from the airport after playing the Roadburn festival. We were all crammed in to this tiny car really tired and hangover with all our instruments and there was a hole in the floor that one could have fallen through driving really fast down the motorway so it was pretty scary. Anyway we got to this club and there was a tiny PA, a beatup drumkit that some punk band had beaten to death the weekend before and two bass amps. So we plugged in did played our set and the place was rocking! It was the best gig we have ever done!

The worst show we ever played… Probably the same gig as above.

The best thing in our band history… When we recorded our album Flash Point. We worked really hard fort two weeks in the studio and had a great time. I will look back on it with very fond memories.

The worst thing in our band history… Nothing bad has happened in our band so far. We have a great time all the time. When we started the band we didn’t have any high ambitions, we just wanted to release a 7“ and now we have released a whole album that has been very well received.

Looking back… We have only been around for two years so there’s not that much to look back on yet.

In 10 years… well, me and Ann-Sofie (singer in Spiders) have just bought a house in the country so in 10 years’ time I hope we live there full time just chilling out in the country but also that we have released a whole load of records and have toured the world.

← Damage – Weapons Of Mass Destruction
Apologies, I Have None – London →