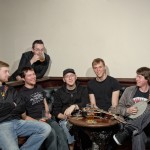 TrueTrash: For our readers who do not already know you: Who are the guys behind „Smokey Bastard“?
Matt: Currently, we are Chris, Mike, Matt, Aled, Lottie and Buttons.

TrueTrash: Where, when and why have you decided to found „Smokey Bastard“?
Matt: Mike, Chris and I (Matt) formed the band in 2006 with some other friends in Reading, UK. We just played for a laugh really. It was a fun style to play and made for good party music. The line up has varied over the years. At last count there have been fourteen different people in Smokey Bastard.

TrueTrash: In the last couple of years many bands playing irish music became quite popular. Did you just jump the bandwagon or was it always your dream to have your own irish-folk-band?
Matt: Most of us liked the music, I don’t know if you’d call that bandwagon jumping. If we did it’s a bandwagon we’re pretty keen to get off now. We don’t really want to be tied down to one style of folk music anymore. I’d say our dream is to become the greatest world-folk punk band ever. Irish Folk, English Folk, European Folk, whatever.

TrueTrash: Let’s talk about your new album „Tales From The Wasteland“. What can we expect from the CD? Does the album differ from your debut-album „Propping Up The Floor“?
Matt: Well, the new one was written over a period of about a year and in a way it documents the transition from ‘doing the Irish thing’ to wanting to branch out more. It’s a lot more varied than the first album and musically a lot more refined and hopefully more interesting. However we’ve started writing the third album so naturally I now hate everything we’ve done before and want it erased from people’s memories as soon as possible.

TrueTrash: Will there only be a CD version or will you release multiple versions, perhaps a vinyl record?
Matt: No plans for a vinyl release at the moment I’m afraid. However the CD does come in some incredibly sexy packaging…

TrueTrash: One song on „Tales From The Wasteland“ is „Mamma Mia“. What was the idea behind covering „Mamma Mia“, which originally is a ABBA song?
Matt: I’m not sure really. It just sounded like it needed awful drunken yelling and pub piano all over it to improve the song.

TrueTrash: Your debut album „Propping Up The Floor“ is available for 9,99 GPB including worldwide postage. Can we expect such a fan friendly price for „Tales From The Wasteland“ as well?
Matt: Hopefully it will be cheaper than that from the distributor in Europe. Don’t hold me to that though as I have no idea.

TrueTrash: Can you live just from playing in „Smokey Batsard“? Or do you have „regular“ jobs?
Matt: We have irregular jobs. Keeps us alive but frees up time to tour.

TrueTrash: Do you have idols? Is there anyone you would like to share your stage with?
Matt: Go listen to our song ‘Aspirations I Have Some’ for a comprehensive list of our idols. It’s on youtube somewhere. The big ones for me are Bruce Springsteen and Tom Waits. I don’t want to share the stage with anyone though. There’s tons of us and there’s sod all room as it is.

TrueTrash: What are your plans for future?
Matt: We’ve got a couple of shows coming up in Germany in February – Wild at Heart in Berlin on the 18th, Sonic Ballroom in Cologne on the 23rd and Schwarzer Adler in Egelsee on the 24th so come along to one of those and say hello. After that we’ve got some more UK touring to do but we’ll be back on the continent later this year some time. We’ll also have a new video coming out soon, along with more episodes of our ‘hilarious’ video blog Cats Like Milk so stay tuned for all that.