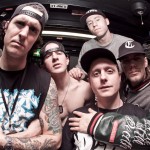 TrueTrash: Your current album is entitled „Big Kiss Goodnight“. What’s behind this title?

Trapped Under Ice: It’s a reference to death, and going out in a “big” way. The idea behind it is to live hard and die doing what you love. For me that’s making music.

TrueTrash: The album was produced by New Found Glory member Chad Gilbert. How did this collaboration come?

Trapped Under Ice: Chad has been a friend to our band for a long time. There was a lot of things we wanted to try on the record and he respected and understood our vision so it made sense for us to come together on this. Chad is great.

Trapped Under Ice: Sam, myself, and our original drummer played in a straight edge band together. We started writing harder riffs on the side. When that band stopped we started crafted our unused material into song that eventually turned into the trapped under ice 2007 demo.

TrueTrash: Who are your idols?

Trapped Under Ice: Iggy pop because he’s like 63 and he still stage dives.

TrueTrash: Currently you have more than 30.000 fans on Facebook. How important is such „modern stuff“ for bands in general and for you in special, to be successful nowadays?

Trapped Under Ice: It’s crazy because it’s so important in some peoples eyes. For me, I personally don’t give a fuck. Record labels can just pay money to get their bands more “likes” on Facebook and more twitter followers etc… Which eventually can help those bands get on bigger tours or more gaurantee money. Were a hardcore band, i dont want to have to prove how “big” we are. However, it is very cool and feels great to know that many people support our band. It has it’s upsides.

Trapped Under Ice: Going to Japan. It was an insane culture shock. Beyond that, we met some of the coolest people ever.

TrueTrash: Is there anyone you’d really like to go on tour with?

Trapped Under Ice: I want to tour with my friends. Were on tour with our close friends in take offense and backtrack right now and it makes everyday feel like the best day. I want to tour with different styles of bands with a true punk rock mentality. I feel like we’ve been lucky enough to have already toured with a lot of bands like that.