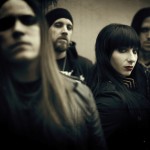 I am…Liv Jagrell, the fucking singer of Sister Sin!

I would never ever…Kill an animal or a human being, I respect life too much.

I would instantly…Say yes to move to San Diego, I fucking love that city!

In my next life…I will either be a scientist digging deep into the great old mysteries of the world like ancient Egypt and other things like that, or I would be a progressive animal/ environment fighter kind of like the Greenpeace today.

If only I had known…How broke I would be at age 30, I would have been better at saving money.. or buying more lottery tickets.

It is long overdue…To cut my hair and “get a job”… Won’t happen, I’m cursed to be a rockstar, yes I am, and I love it.

Sex, Drugs & Rock’n’Roll…Is overrated and hardly true. Try hard work, no sleep, no cash and sometimes beer, and you are more close to the truth.

A band worth seeing live…Swedish band Entombed, they fucking blow your head off… in a good way!

A band I would have loved to see…Is Pantera, ohhhhh Pantera, with Dimebag… crying a bit now.

The best show we ever played…Could be one we played this summer at a Swedish festival Skogsröjjet, lots and lots of people banging and screaming with us, fantastic!

The worst show we ever played…Was a show in Arizona on a tour we did a couple of years ago. I had been sick and could barely speak, so I had to sing all the songs one octave down, and it sounded horrible. After the show I was so mad I went out and hit all kinds of things I could find… Mostly it just hurt my legs and arms haha.

The best thing in our band history…Would be playing with Motorhead, that was awesome, since we all are Motorhead fans.

The worst thing in our band history…Is that we seem to have a curse on our bassplayers, we tend to lose them. I really hope we keep this one (Strandh) because he is the best ever.

Looking back…I definitely wish I would have done certain things in another way, but I don’t have many regrets in my life, thats just stupid to regret things. Move on and make the best of it!

In 10 years…I will be touring all over the world more than today, playing nice stages with other great bands and make a living out of what I love the most, playing rock n roll!