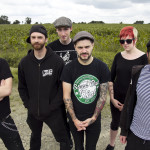 I am… Matty from the Roughneck Riot.

I would never ever… pay to play again. Neither should anybody else.

I would instantly… start up a studio and label if I had any money.

In my next life… I won’t play mandolin in a band.

If only I had known… Mandolins were such a pain in the arse.

It is long overdue… alien invasion.

Sex, Drugs & Rock’n’Roll… can all be found at Roughneck’s shows.

The first record in my collection… Americana by The Offspring.

A band worth seeing live… Roughneck Riot! And Faintest Idea (though they may steal any Taxidermy animals you have) I also saw Against Me! On Tuesday and they were fucking awesome.

A band I would have loved to see… Kings Of Nuthin’

The best show we ever played… It’s hard to say, they keep getting better every year. This year we had some really cool shows like in Aachen, and some awesome festival shows like Couvre feu in France and Fonnstock and Wilwarin in Germany.

The worst show we ever played… oof that’s hard. I’d say playing last at a festival this year AFTER Madball was one of the worst. Most of the sound crew didn’t realise there was another band and one poor guy was left to do everything. Looking back it was funny and it was still an awesome festival. Actually, Greeny’s mum’s 40th birthday party was much worse.

The best thing in our band history… All the friends you make along the way. The people that genuinely want to help you and see you progress

The worst thing in our band history… saying goodbye to old friends and getting involved with the wrong people.

Looking back… I’d probably do nothing different.

In 10 years… I’d like to have toured most of the world and give my parents some money.