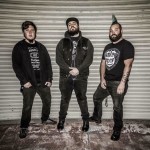 I am… Casey Dillon Patrick FitzPatrick the Irish bastard

I would never ever… Start a cover band, can’t do it

I would instantly… Eat all the food

In my next life… I would be a dog

It is long overdue… Bills

Sex, Drugs & Rock’n’Roll… not in that order

The first record in my collection… The Beach Boys, Pet Sounds

A band I would have loved to see… The Kinks

The worst show we ever played… Probably one of our first gig when we were kids and not a single person showed up and my amp broke.

The best thing in our band history… Coming over to Europe of course!!

The worst thing in our band history… Losing the original bass player of this band who was tragically killed at our show in Oakland. To this day it is still very tough dealing with.

Looking back… I’m super thankful for all the good times I’ve had with this band and friends we have made along the way.

In 10 years… I will be grumpier and older but still playing music as much as possible.