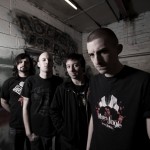 TrueTrash: For all of our readers who do not already know you: Who is „Random Hand“?
Robin: Four good friends with different tastes in music, arguing about what to play.

TrueTrash: You are playing ska with hardcore-punk and metal elements. How did it come to this musicial style?
Robin: We all have a common interest in the music we love and the way we perform, that is to play loud and hard. That mixed with four people with varying passions and obsessions in the music we listen to creates the mix everyone else hears.

TrueTrash: Your new album „Seething is Believing“ is already your fourth album. Given that is it still something special for you to release an album or has it become business as usual?
Robin: It’s actually our third! but don’t worry about that, I keep thinking we’ve done four as well. Something definitely changes after you make the first album. When you start touring to the level we have its hard to find time to write and let another album evolve. So it becomes more a task or job to write and create. That said, Each time has been unique and exciting, both writing and recording. Maybe we’ll think differently with the next one, who knows?

TrueTrash: How is the process for creating a new „Random Hand“ album? Does every bandmember collect some ideas on his own? Or do you sit together and work on new songs as a team?
Robin: Its a pretty organic Process, We’ll each have some ideas and then we’ll throw them into the pot when we’re in the practice room. some more coherent to start with than others. These will then take shape and grow in to the finished songs.

TrueTrash: What’s your favourite song on „Seething is Believing“? Well, all of them are awesome, but if you could only pick one?
Robin: It has to be “tales of intervention”, Robin’s lyrics are an autobiographical take on experiences playing abroad and it fills me with huge pride to play it

TrueTrash: You have toured a lot and played many gigs in the past. What was your worst experience?
Robin: Anything involving being late for something tends to go on the list. We missed a gig with Fishbone last year because we got stuck on the M25 (London Ring Road) while London went mad for the Royal wedding. We where completely helpless and just watched the clock tick past our sound check time, then past the doors then past our showtime. Very sad!

TrueTrash: And what was your best experience?
Robin: Being late can by contrast, sometimes create some of the best experiences. We played a festival in the Cheque republic called Mighty Soundz in the summer and had a drive from Berlin on the day of the gig. Due to a communication error, we had the incorrect stage time. About an hour before we expected to arrive there we got a phone call asking where we where and that the festival was ready for us to sound check. It didn’t sink in at first and took a while for the penny to drop and realise that we where going to be late. We Rolled up to the festival 5 mins after we where supposed to play, ran straight on stage and plugged in and went for it. The tent was at capacity and the show went off. The sheer adrenaline of being late and actually getting on stage made it one of the best gigs in recent years!

TrueTrash: If you had a wish: Which band would you book to support you on tour?
Robin: I would love to go out with a band that where just as ‘Alternative’ but from a different scene and really bring new people together at some shows. I’m a big fan of Hexes at the moment, their album “White Noise/Black sounds” is a truly awesome record

TrueTrash: In 2012 „Random Hand“ will have its 10th anniversary. Have you planned anything to celebrate this event?
Robin: Nothing is planned yet but I expect we will pull together a big local show of some kind. We only just celbrated our 1000th gig, so it may seem like we’re finding every excuse to party at the moment!

TrueTrash: 10 years – one band – the same people every day (or at least very often). Isn’t that exhausting? Or are you always on the same wavelength?
Robin: After ten years we’ve got very good at knowing when to give each other space. It definitely has its hard time but at the end of the day we’re four best mates and that is stronger than any argument or niggle we may have.