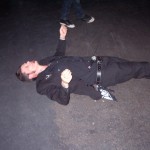 TrueTrash (TrTr): You are not playing together as a duo for such a long time. How did you meet?

Sean: We met 7 years ago on a Circle jerks/Throw Rag tour…We have benn playing as a Duo for close to 3 years now….

TrTr: Both of you gained experiences in quite successful bands. In what extent have your ex-bands influence on your current music style?

Sean: Not much really were playing music with great spirit but nothing like our punk bands…acoustic duo as opposed to electric rock…Being in bands for a long time always helps with how to make a set flow …create a mood….bring em up, bring em’ down…keep em guessing …and hopefully we all enjoy the ride…

TrTr: On stage you seem to be a very equal duo. Have there been any differences between you?

Sean: I have a tendency to want to make songs a lot shorter and zander wants them to be whatever he feels is right for the song…I try and trust zander because he has a long history of making beautiful music and understanding music…im all vibe and feel ,So sometimes the things i like make no sense in traditional music arrangements .The important thing is to try and remember if someone is good at what they do let them do it…Communicate…and just because im right dosent make you wrong!

TrTr: You just came back from your first european tour? Was it successful? Was it worth the experience?

TrTr: Are there some more gigs scheduled in Europe?

Sean: Not as we speak…but i hope to be there again soon….

TrTr: After your split with „Pascal Briggs & The Stokers“ you have now released your first complete album „Walk the Invisble“. Can you tell us something about its origin?

Sean: We recorded that with our friend gus seyfert in his living room in echo park…he is someone zander and i both respect and trust…so he was the boss! Great guy…Hoping to do another record with him at the end of this year..

TrTr: The split album was released on CD and vinyl. Will there also be a vinyl version of „Walk the Invisible“?

Sean: It’s walk thee invisible not the….eventually it will be on vinyl…Vinyls final!

TrTr: What are your aims for the future?