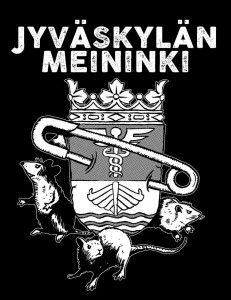 (A German speaking version of this interview was first published in Trust Fanzine #183.)

Somehow this is the second part of my brief portrait on the DIY and punk scene in Jyväskylä, Finland. ‘Somehow’ because this here is going to be an interview and no monologic report. But, who will be interviewed? For that, a short version of how we got here:

I was waiting at that glade since an hour or so. One of the local punks in Jyväskylä told me the other day during midnight-dusk, if I would wait 1-2 hours at one spot, it would be pretty likely to encounter some wild animals. – But: nothing. No peep whatsoever. Was it naive to think that one would find here a perfect idyll? That perhaps a moose would cross my way or some weasel? That it perhaps by night – under the Northern Lights – would stand in front of me and I – in shock and awe – would say: „Wow!“? – Instead: all mooses are dead. Apparently. These animals are more and more migrating to Brandenburg now, I heard, and remembered a rather trivial report from a small town’s newspaper right at the boarder to Poland.

The sound of an incoming text message immediately disrupted the silence, which from time to time was only disrupted by the roar of an Off-Road-Motorcycle far away, mingling itself together with the grey in grey daylight. It was Olli. The same local punk who told me that in Finland you might be able to actually see animals in the wild. Pah! He wrote: „Look, you wanted to know how it is with punk and everything here in and around Jyväskylä. There is this guy, Mikko, who is currently working on a documentary about this whole stuff. The documentary is planned to be released in October 2016. With him you can talk for hours about that. Here his number.“ END_OF_DOCUMENT_TOKEN_TO_BE_REPLACED