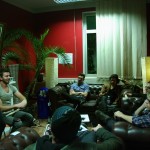 TrueTrash: You are touring with “Bush” at the moment. The Munich gig today is the last show in Germany. Afterwards you’re leaving for Austria and Switzerland. How was the tour so far?

Christian: It’s been good. You know we’re having our fun. It’s been just in Germany so far, enjoying that. Got two days off, got to see some cool stuff, so everything good right now.

Dominic: The Bush guys have been really nice, really amiable guys and friendly.

Christian: So we’ve been enjoying ourselves.

TrueTrash: What did you expect from the tour? I mean you haven’t released anthing here in Germany yet. The album will come out next year. So what were your expectations?

Dominic: I guess, just to play good shows. Win over the crowd, hopefully by the end of the set we are doing.

Christian: Exactly, to gain some fans you know. Get a name out there, you know we’ve done a few shows in Germany before, so hope just to keep presence in Germany. With the release of our album, push into that. 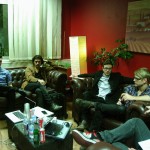 TrueTrash: The concerts on the current tour were a bit smaller. I think you already played big shows on big festivals. So is there any difference for you playing big shows, playing small shows?

Perry: I personally prefere the club shows, I guess.

Perry: It’s lot more intimate. You get your energy, you know, if the crowd depricates it

you feel it quicker, instantly. When it’s big shows it’s hard to judge that, so far away from the crowd, there’s so many people you can get lost but Club shows are so much closer that it’s a lot easier to pick up on how the crowd is reacting.

Christian: They’re little more relaxed. On festivals so many bands have to get on the same stage, so it’s a little bit more rushed; hurry here hurry there, so it’s nice to have a little more time, setting everything up and really make sure everything sounds right.

TrueTrash: Did you have any kind of special preparation for the tour? Like practising a lot? Going on holiday?

Dominic: No, not really. We practised like two, three days before we headed out on tour, pack. I think we all tried to avoid each other as much as possible.

Greg: It’s getting a long time.

Dominic: Some solitude before we hit the tour and have to see everyone’s face for a month.

Dan: We just enjoy ourselves, enjoy our company so much that you get rude. You wanna make sure that it’s still special.

Dominic: No but it’s like a family. When you are on the road it’s great but when you are at home we have all seperate lifes, so we don’t see each other all the time. Well we do see each other, but we’re not like „Hey what you’re doin? Wanna hang out?“ when we just got home.

Christian: I think, go eat some of my favourite foods, you know. They are specif

ic to the area we live in.

Dan: In and Out is the first thing I’ve came along.

TrueTrash: As you said it’s not the first time in Germany. Are there differences between gigs here and gigs in other countries? I think you were in Japan for example a few month ago.

Christian: Ah, I don’t know. Guys are there differences between German and other gigs?

Perry: What we’ve heard: That German crowds are harder to win over. But I th

ink we’ve just been lucky. Actually we’ve been playing some of our better shows. I think the last two or three we’ve played were one of the most solid performances we have had.

Christian: It’s been good. Crowds have been great.

TrueTrash: So we’re in Munich today. Have you ever visited the Octoberfest?

Christian: We’ve only heard. We were in Berlin, it was September 15th?

Christian: We wanted to get all over Germany, and thought we’re gonna go to Berlin when Octoberfest will going on. But they told it it’s in the south and we missed it, so it’s sad.

TrueTrash: Have you learned any German yet?

Christian: „die“ (pronounced it like the english „die“; means the english „the“). I kept seeing „die“ everywhere. In English it’s just a completely different word. So what does that mean in German?

TrueTrash: You were on tour with really big bands like PLACEBO, LINKIN PARK and many others. What we thought about it, generally younger bands that are not so popular don’t get gigs at all and you had gigs with such big names. How did you do that? Did you have to pay off anyone?

Dominic: It’s quite a long hitlist of people you have to kill.

Dan: We never had to pay off.

Steve: We never had to pay. We’ve had to take no pay.

Dominic: Well with Placebo we’re on the same management as them.

Perry: We have lucked out people for some reason have liked our music and wanted to be a part of what we were doing. So we started out with being kids, we just recorded demo. Dan wasn’t in the band at the time he just recorded our first demo and the guitars wanted to produce it and from that point on we got on some tours through them and then bands wanted to take us out like Placebo and they got it on with their management. From there it kept snowballing.

Dan: Also a tribut to our current management as well. They are really helpful with buying us, getting bands touring with us, helping us out.

TrueTrash: Why did it take about 5 years from your debut EP to your firs

Steve: It were only 4 years.

Steve: Well in Germany, it’s not out here so it will probably be 5 years.

Dominic: Yeah. In that span we went from being signed to parting ways of their old management. So as a band there’s been a lot of struggles. Two new members.

Steve: We weren’t necessarily writing for that album the entire time, but we were going through so much shit.

Steve: And it was kind of phasing out, that our old management and label it took maybe a year and a half before that completely was out of picture. Then start over and build it back up. Prepare and release this record. So it sounds like a long time, but it wasn’t us beating our heads against a wall cause we couldn’t write a record. All that things have come together before get it to a release.

Greg: Actually more than that.

Steve: That was after we had focused it down on all the ideas and it was almost too much stuff, thats why the record’s called „Woven Material“. Collection of all the material we have written.

Dominic: So to quick summarize your question: We were going to a lot of personal and band bullshit.

TrueTrash: In the US and in the UK your album is already out. But not here in Germany – probably in spring 2012. Do you release it country by country or why does it take such a long time to release it?

Steve: We don’t have like one unifying record label. We do licensing deals. It’s kind of different ways to do it these days, cause the industry is not very good.

Steve: We are just happy that it’s getting to see the whole world. A lot of bands only release it in the country they are from. We get released all over and see it growing and find our record.

TrueTrash: Will you come back for an own headliner tour after the albu

m is released in Germany, or don’t you know yet?

Christian: Definately we would love to do that. For now we’re happy doing the support slots gotta keep building a fanbase headling is always the ideal of situation.

TrueTrash: Last question: Can you live from the music you’re doing or d

o you have to do „regular“ jobs?

All: Oh yes (all laughing)

Dominic: Steve’s a woodworker, builds cabnits. Greg’s a farmer. Dan does sound at a hotel. Perry is a construction worker. I sell a bunch of shit on ebay (laughing). Many different things. And then Christian is guitar teacher at school. He (Greg) gives drum lessons to three year olds (laughes), to little kids.

TrueTrash: Thank you very much and have fun on stage!