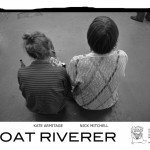 TrueTrash (TrTr): You are a duo from Manchester, formed in 2010. How did you meet?

Nick: I first met Kate in 2005, but I don’t think she remembers the encounter. Her band Hotpants Romance had just formed and we were all in the same pub. Kate was wearing a massive fake fur coat and had bright red lipstick on and looked like a precocious punk. I remember I thought she was hot but was probably a jerk, ha ha.

Kate: I’d seen Nick around at gigs for years. I thought he was a dweeb. He came to see my band Hotpants Romance and said we should be in a band together. I thought he was taking the piss but it turns out he wasn’t. We got drunk at one of our first practices and ended up talking about how both of us had had a bit of a dismal summer so decided to hitch-hike to the south coast and swim in the sea, which we did. That is when we both decided we would both enjoy being in a band together and touring around playing, drinking and exploring some new places. That was a good holiday.

TrTr: Are you a couple in real life?

Nick: We are a couple of idiots.
Kate: No, Nick is my Dad.

Nick: I don’t think it’s a case of one or the other. It’s a symbiotic relationship. If you listen to Kate’s lyrics, they’re just a series of her experiences all mashed together into single songs with little bits of far-fetched fantasy in there. But, at the same time, I don’t channel some kind of inner angst or joy or whatever into playing guitar. It’s more that I grew up listening to whatever guitar players and liked the fact that they played like they were drunk/high and had a good ‘tone’.

TrTr: You are playing classical garage punk. Why did you decide to do this style of music?

Nick: Really? Do you think so? I mean, we wrote that on the blog, but I don’t know why. Kate, do you think we’re ‘garage punk’? Like the 13th Floor Elevators?

Kate: I don’t know. We play this way because it is fun and you can shout, play scrappily and get drunk and that only helps the situation. Well, that is my philosophy. I can’t say that Nick always agrees.

Nick: All I know is that there’s no bass so people are immediately going to compare us to the White Stripes if they don’t have much in the way of imagination or reference. But if you listen to the songs, I think I’m playing the kind of chords you’d equate with ‘garage punk’ in about three of them. I’d like us to play sloppier, even though I always tell Kate in rehearsals that we should play tighter. I sometimes think we’re too jagged – I want us to fall apart a bit more. Anyway, I think we’re ‘indie rock’ if anything.

TrTr: Who are your musical ideals or idols?

Nick: I guess you can separate those into two categories. If, by ‘ideals’ you mean influences, then I guess that relates more to this specific band and I’d say The Fall, The Bachs, The Velvet Underground, The Stooges, Royal Trux, The Germs, The Godz, Henry Flynt – guitar music with harsh production and odd voalists, basically. In terms of ‘idols’ (and I use that term loosely – I would more likely say ‘musicians I most admire’) the scope is a little bit broader – all of the above plus Albert Ayler, Neil Young, Alice Coltrane, The Grateful Dead, Black Flag, Sonic Youth, The Rolling Stones, Funkadelic, The Supreme Dicks, Mick Flower, The Fugs, Jandek, King Tubby, Bruce Springsteen, Motorhead…

Kate: I’d say The Monks and the Beach Boys are my favourite bands this morning. I would usually say the Fall but we met Mark E Smith the other week and he was a total arsehole to me so I’m having a Fall holiday at the minute. I was quite close to punching him in the face but I thought better of it. Patti Smith is the closest thing to an idol for me I guess. I cried hysterically all the way through her set when I saw her in Barcelona. It was something else. I guess anyone who shouts loud and means it is okay by me.

TrTr: You already finished a tour througout Europe. Did you have any sad experiences being on tour?

Nick: Ha ha ha, great question. Yeah, the saddest part was saying goodbye to Derek and T-Bone, our touring partners, at the airport at the end of the tour, as they were going back to Detroit. We were on tour with Turn To Crime, which is Derek Stanton from Awesome Color’s solo project. Anyway, he brought along his buddy T-Bone and we spent six weeks on the road together. We all knew exactly how each other’s feet smelled by the end of it and we all knew exactly how to get on each other’s nerves, but we also became very great friends and I miss those guys a lot and can’t wait to see them in Detroit next year, hopefully.

Kate: Not being able to find Hummus in supermarkets was quite sad.

TrTr: What was the funniest thing, that happened on tour?

Nick: There were a thousand funny moments. A lot of them were private jokes that would sound dumb here. It was pretty funny when Derek got out of the car in Antwerp and directed traffic.

Kate: Pretty much everything was funny due to sleep deprivation, not being able to communicate with anyone too well and an abundance of alcohol. It was kinda like a school trip.

TrTr: Your first release was a cassette tape limited to 100 copies. I kind of like this old school stuff, but I don’t even own a cassette deck any more. Did you sell one single copy of these?

Kate: There are quite a lot of bands releasing things on tape in the UK. I guess because it’s very cheap to do so and you can self-release things very easily and quickly. Although it is getting harder and harder to track down a cassette deck to play them on. I guess there is a bit of nostalgia involved on my part too because all the first music I bought was on tape because I couldn’t afford the Vinyl. Before the age of ten it is pretty hard to lay your hands on any real money.

Nick: For the most part the tape scene is centred on noise, sound poetry and suchlike, but I have started to see a lot more tape labels releasing actual songs of late. Like Comfortable On A Tightrope in Manchester, they’re very good, although I don’t think many people buy their stuff. My favourite tape label is Winebox Press – all the covers of the tapes are individually handcrafted lumps of wood with brackets and hinges and screws. They’re like small pieces of furniture. And the stuff on them is amazing too. But, to answer your question, we sold quite a few tapes although we still have a handful left.

TrTr: Now you just released your first full length album. What’s its origin? Did you follow a special concept?

Nick: Its origin is that we had twelve songs written. There’s no overarching concept. The cover is plain white not due to some kind of ‘statement of intent’ but just because we had a limited amount of time to get it ready. We still didn’t get any copies to take on tour until about halfway through, though. Concept albums are for prog bands, right? We’re like the anti-concept album band.

TrTr: In October and November you’re leaving Manchester for your second European tour. Do you have anyone travelling with you, or is it only the two of you with your drumset and guitar on your car’s backseat?

Nick: For the UK part of the tour, we’re taking along our friend Charlene Darling. We met her on the last Hotpants Romance European tour in Paris. She has this amazing band called La Ligne Claire who played with Float Riverer last time we were in Paris. They’re a kind of no wave pop band, all jagged corners and sloping bass lines. Her solo stuff is more sparse, haunting and comical sometimes. Really amazing. I think she’ll be a joy to travel with, too. The rest of the trip will be just us. I think in a lot of ways it will be easier than last time as there’ll be fewer people to consider, but then again, having more people on the road means that there’s always someone in a good mood, even when everyone else is burnt out and ready to kill themselves or someone else.

TrTr: What are your plans for future?

Nick: I want to be bigger than Nirvana.

Kate: To keep touring as much possible. To hit the drums a little harder. To still be doing this in 50 years.