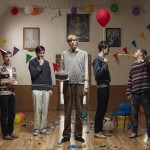 TrueTrash: You are a 5 piece band from Oxford. How would you describe your music?

Spring Offensive: A bit melancholic maybe, in terms of lyrics especially. We try and counter that with stupidly upbeat and dancy rhythms and guitar parts. It’s a kind of ‘chin up’ attitude. I think you would like our music if you are fan of Wild Beasts, The National and The Villagers. Maybe I am wrong.

TrueTrash: When did you meet for the first time?

Spring Offensive: We have all been friends for about 7 years now. Some of us met at school. Joe (bassist) joined when we moved to Oxford in 2009.

TrueTrash: In October you’re going to play a tour througout Europe. What are your expectations?

Spring Offensive: We have played all ends of the spectrum. From packed out venues to ill-attended wheezing pub crowds. We just love to play. Love to gig. Love to perform.

TrueTrash: You released a special 4 track ep which is availble as a free download from your website for all German fans. What do you expect by this? New fans? Many people visiting your concerts?

Spring Offensive: We don’t expect staggeringly huge amounts of people to know us in Germany so it is important to push the shows and try and get us out there as much as possible. We have also made a CD especially for Germany, and exclusive for the tour.

Spring Offensive: They are important for us, but not that important to us. At the risk of sounding like staunch traditionists we tend to focus on live shows more than anything else. However, it is obviously vital to reach as many people as possible.

Spring Offensive: Yes, but it’s a long way off. When it arrives, everyone will know about it. Right now we’re just getting as good as we can be. We’re so focused and wrapped up in being this band. The album will be a product of that.

TrueTrash: Can you tell us your funniest or craziest anecdote?

Spring Offensive: Very little happens to us. We tend to live vicariously through the people who come to see us play. Hard drugs and parties were things we did when we were younger. Now we’re more red wine books and guitars. Maybe it’s a lack of money issue.

Spring Offensive: Read, write, listen, create. Sleep. Repeat. If we can live like that, we’re doing the right thing.