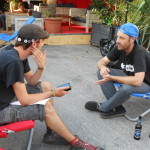 You’ve been a band for nearly two decades, do you feel old now?
Today I do, at the end of the tour! No, obviously we’re getting older and, of course, our music is changing as we’re getting older and we couldn’t do the same things we’ve done on our old records. So I’m happy at all. Some people don’t like our new music, some people want us to play faster but I don’t care. Our new record we already started to write is even more new orleans jazz, more rock, more reggae but that’s the way it’s gonna be from now on.

Did your approach on music change in that period?
Yeah, we got slower for sure. And I think we’re trying to get our music more simple. Our old stuff was fast and there were a lot of notes and our new stuff is just… more simple, more catchy and less notes.

Seven years after Keep It Going you finally released your sixth record Dirty Rice, why did it take so long?
First of all we did a lot of touring. We were touring it for 2 years in America, South Africa, Japan and Europe. After we were doing that, well we all have other lifes outside of the band and the other thing about being older is that we love doing music but we got other things besides the Mad Caddies that define us as human beings. So I was living in Jamaica and producing music, our singer had his project Ellwood, our trombone player was in arts-school doing graphic art, our bass player makes wine, we all do other things so we wanted to take a break. We also tried writing songs but every song we were writing sounded like old Mad Caddies and things we were bored with. We didn’t want to rush it so we waited until we started writing songs we were liking.

What is it like to work together with Fat Mike?
Good! Well we worked with him in the past, he’s really fun to hang out with. He’s a good friend and one of our biggest fans for a long time. So sometimes he’s got good advice. He came down to where our studio is for two days, listened to our songs and gave us some advice we took, wome we didn’t take, he wrote one song with me and our keyboard player. Well one half went to a concert that night and the other half stayed in the studio, we were jamming on a song and the song was finished in 15 minutes. That was the first time we wrote a song with him. Usually he would just say “try this melody” or “change this chord” but this time I had an idea, Mike started singing something and our piano player started playing.

If you had to persuade someone to visit one of your shows, how would you do it?
I guess I’d try with free alcohol and drugs, haha. Reading through your promotion text, I noticed you quite enjoy drinking. How do you manage to keep that energy when your on tour for weeks? We were just talking about that! It’s difficult but during the day we drink a lot of water, then in the night we start drinking some beer and then start feeling better. It’s now matter how you feel unless your really sick, when you walk on the stage the adrenaline kicks in. It also depends on the crowd but we have really great fans so it’s nearly always fun.

What about your families, how do you manage family life and touring?
Well I live in Los Angeles and I don’t have a girlfriend, so I’m free. We don’t tour as much as other bands and recently we go on tour for ten days, come home for three weeks and then tour for 10 days again, so especially in America, unless we really have to do it we don’t want to go touring for a month. So maybe 10 days California, up to Seattle and Canada or we fly to the East Coast and play there for ten days but we don’t drive around in the whole country, we haven’t done that since 2007.

Can you tell me a funny touring story please?
We have a lot of funny stories! This one happened in Germany once! We were driving through a village, there was a big band and in the bus that we had, there were a lot of windows, we looked out of the windows and our trailer passed us on the other lane, just like in a cartoon, and it was only a two lane road so it would have killed it. Then it went on the sidewalk, our trailer had all of our gear and it was going 40-50 km/h and it weighs a couple of thousand pounds and would have killed anybody. It wasn’t funny at that time but it landed in some bushes and came 3 feet from a car in someones backyard. Then our bus stopped, the police came. They were really nice, the trailer hit an apple tree, an old lady but the apples that fell down in a bag and gave us the apples and the people from the venue came and picked up our trailer. We came 40 minutes too late for the show but that’s it. Thank god nobody got hurt!

How would the College Kid Mad Caddies react if they saw your succes now?
I don’t now, I’m sure we’d be happy. We got signed by accident, we never planned doing this for a career, we never thought about being musician for a living. At that time we didn’t really think about careers at all. It never was that dream we all had that was made, sure it was cool, but more strange than anything. We weren’t expecting it because we never really worked for it. That sounds weird but it’s true, we just had fun and wrote some songs!

Can you please tell me a bit about your other project Ellwood.
That’s Chucks project, they had some tours in the US and a small tour in Europe. I think he had done it because he had a bunch of Reggae songs, I was living in Jamaica, our trombone player was living in Columbia, well we’re all over the world. He had some friends in the village he lives, he wanted to do some music while we were away from each other and well, he could answer more questions on that than I can!

Do you already have plans for your 20th anniversary?
No! I don’t think we did something for our 10th anniversary, we do things last minute in this band!

What do you do when you’re not on tour?
I’m always doing music! I live in LA and have a recording studio and there I’ve got all kinds of music like Panamanian Dancehall, Hip Hop, Reggae, many electronic music and a little bit of rock. There’s a band called Whore, we did a couple of songs for them, it’s a grimey HipHop mix with oldschool Hardcore like BadBrains or MinorThreat. I saw one of their shows in LA, there was no stage, just P.A., 50 kids in a concrete room and it was probably one of the top ten shows in my life. They were like the Bad Brains in the 80s, so watch out for them!

Is there a Band you would call as the most influential Band on Mad Caddies?
A lots of bands, I think we’re influenced by a little bit of everything! Influences from when we were kids, the Punk Rock we were listening to, The Specials, Bob Marley, Lagwagon, NoFX, Mano Chao, well a lot of bands.

Are there venues you have special relationships with?
Club Vaudeville in Lindau is the number one. And the others are no venues but we’ve got friends all over the world. For example in Montreal, the promoters, the people who do concerts, had done all of our shows there except for one and there really good friends.

What can your fans look forward to the next years?
We are doing two records. We got a new Mad Caddies Album but before that we’re gonna do another album. I can’t say what it is but we’re doing another record before the new regular record! We’re making up for not having a record in six years, we got a new record we’ll record in the summer and then we’ll hopefully record another one next springtime.