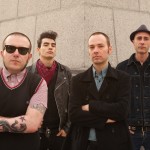 In January you released your fifth full length record Generation Nowhere. Anything special to tell about it?

“Generation Nowhere” it’s the record I always wanted to make, Offenders sound, not much compromises. Lyrics reflect in my opinion what’s going on here, from street life to private matters, a generation unknown, a generation lost, a true generation nowhere. I wish all people will stop for a while reading the lyrics, I must say already some are coming after show asking more about those new tunes, and some really identified themselves in songs like “Berlin will Resist” or “We will always be with you” , last one truly dedicated to all our fans. That’s the best reaction ever me and the rest of the band could have tought about before the release…beside we spend few weeks packed high in the ska charts as well.

You’ve played in several countries yet, recently even in China. Are there big differences between the crowds in different countries?

I guess it’s stupid denying differences, there are tons of differences in between people and cities, even in the same country….take Germany for example, north-south-west-east….all different situations, immagine so far away like in China!!
I would say we loved to “touch with our own hands” how the situation is developing over there, sure isn’t like here : subculture still kind of a “new thing”, except Beijing and Wuhan we didn’t meet many kids that were much into skinheads, punks, rockabilly or whatever…state repression still fucking tough, freedom still just a concept written down in books but far away from reality, and that makes kids life way more difficoult. Immagine that to let us play in Shangai, the government wanted all our lyrics upfront, to check what we were talking about, if we had some songs against police, state or whatever….fuck that, we didn’t play in Shangai, easy.

Any touring memories you don’t want to miss?

I don’t wanna miss every singalong we had during our shows, wherever we’ve been, from Beijing to Moscow, from Blackpool to Madrid, from Berlin till wherever else we’ve been….beside that, many other private stories I can’t tell, or better, next time let’s make an interview just about touring moments! ; )

Are there maybe some funny touring moments you’d like to tell us about?

I’d rather prefear not to answer about it….more of our “funny” moments beside stage time, are releated to parties…and you know what people usually do in parties right? Or after parties…ahh…i can’t tell! Listen one of my song like “Tonight” or “Never trust a smart guy” and you can get exactly all I mean

Are there some shows you especially remember?

I really have several, can’t say which one went deeper in my memory….right now I would say when we played with Bad Religion at Pod Parou Fest (Czech Republic) last year…several thousands people and the honour to get on stage after one of my favourite “teenage time” band

Is there a club/festival you are always looking forward to come back to?

We’ve been in several festivals and clubs as I said, hard to say which one we love more. I can say our annual show in Berlin at Clash it’s a kind of “ritual”, a tradition, not only for our fans but also for us, since we are usual custumers there during the rest of the year, and we love to know the bar tenders and always ask for more drinks ; ) Yea, I would say Clash cause traditions count.

I know, musical taste is an individual thing but do you think there are any must-see live acts?

There are several of “must seen” live acts, and I honestly don’t know from which one should we start. I wish I could see Clash once, but I guess I can give up with that. I wish I could see the Joe Jackson band playing all “I’m the man” or “Look sharp” album, but I guess I can give up on that. I wish I could see the reunion of The Jam, but since Paul Waller have enough money I’m afraid I should give up also that…or maybe here and only here I could have a chance still ; )
My list still long enough just about wishes and desires I would never satisfy, about the underground talking, I would hardly recommend some of my friends, like Movement, or Valkyrians, just to name 2 that are often on my spin table.

CLASH still winning, but even Who with Keith Moon, Small Faces, Starjets, The Wailers in the 60’s, Desmond Dekker and the Aces in the late 60’s, Wilson Picket, Jackie Wilson and Christ!! If u want I can just mention one after the other my records I have here….mostly all of them are made by people who are dead or not performing anymore. Sadly. Instead there are people who should die but they are still making music and still having storm of idiots following them…don’t you think that life is unfair?

Are there some records you won’t like to miss in your collection?

Today suggestion – Richard Hell & The Voidoids “Blank Generation” / New York Dolls (self titled) / Dr Feelgood “Down by the Jetty”.
If you never heard this albums and you think to know something about punk in all his kind, from oi! To street punk, hard core and whatever else, do yourself a favour and change style. You can’t read a book if you don’t even know how each letter sounds. Hope I was clear enough ; )

Most songs on Anthems From the Gutter are covers, why did you pick exactly those songs?

Was a kind of mix of some covers we did back then live, I mean, we are still playing mostly at the end of everyshow “White Riot” and sometimes some ask about “because your are young” honestly one of the best track from Sparrer, at least by my side. Plus there’s our version of “alright” from Supergrass, since i’m a true brit pop fan, I grow up in the 90’s and I love such sound that was so popular back then too.

What do you generally think about cover songs? Are they meant as tribute to great bands, like those Clash covers you play for example, or do you just pick those songs because you liked them?

It’s always in between, at least by my side, depends of which band do we talk and depends which song. Refearing to Clash, since it’s one of my favourite band and I have on my forearm the words “Stay Free” tattooed since years, I guess it’s a daily tribute the one I pay, not only on stage. About other bands, it’s just a cover song.

And is there any band you would advice everyone to give them a chance and listen to them?

You mean a new band or anyway not much known? Well…i’m a big fan of “The Pikes” mod revivalist from Berlin, I think they are brilliant, their last record “something is going on” honestly kick the ass!!!!

Is there a Band that had a special influence to you?

It’s quite hard to pick up a name like that….i’d rather mention Clash & Secret Affair, just to give a complete overview where the sound of Offenders is coming from.

The German Electropunk band Egotronic’s mastermind Torsun once said in an interview that they don’t define themselves as a political band, he only writes about topics that bother him and politics are one of those topics. In Songs like Oi Skins or Action Reaction you sing about political topics, too. Do you define The Offenders as a political Band?

I’m really sorry to disappoint you, but “Action Reaction” isn’t a political song at all, it’s talking about take actions in every day life situations.
Oi! Skins, really easy topic : when style came up massively in Uk around the late 60’s and became fashion at the end of the 60’s (what we call the Spirit of 69!) was followed by white, black, purple, green, blue people, whatever, mixture of rudeboy culture from Jamaica, some italian brands like Vespa-Lambretta and clothes, ska-soul-r’n’b, football fans…basically as mods. The first mixed race subculture ever. In the late 70’s right wing started to grew up in between skinheads, bringing racism into something that didn’t admit racism at all. The message still simple : if you are fascist, if you have fascist friends, if you are a racist bastard or you are tollerant with racist bastards, this style isn’t yours. In the Oi! Scene this crap is really common, so that’s the easy message : Oi!skins, don’t forget your roots. If you wanna have a scene without politics, we must step back as we were, a true antiracist subculture, so no right wing at all admitted.

Now a rather personal question, why did you move to Germany? Were there political or personal reasons or was it because of the band?

We moved to Germany shortly after Hooligan Reggae, thanks to the underground “success” of the album, we had the chance trying to play music in every day life and not as side hobby. In that year back then we signed with Grover (2009) and we started working with Muttis Booking, which still since the early days our second family, not only one of the most known booking agency in the underground all over Europe.

I heard you denied to share the stage with Grauzone bands, maybe best to be translated as bands who don’t clearly deny right wing people, even though you were offered a high fee.

You might have heard it right. But we never advertised such things to gain more success or to be more cool for a certain kind of people, we are simply not interest to be into something “fascist friendly”. No Way.

What do you think about the Ska scene now? In the late 70s/early 80s some Ska bands like Madness or The Specials were even comercially quite successful but now Ska is more an underground thing.

Ska revival was something that burned fast, as also Neville Steple mentioned in his book “Original rude boy”. Business always try to kill his creatures, it’s really common, when something is becoming fashion, soon it’s gonna expire. If wasn’t for the subculture, Ska revival or even the 60’s ska, rocksteady, mod revival, even punk were destinated to be forgotten. We are still here, style will survive to fashion, we already proved that into the years, we are stronger then any advertise or MTV, we are still carrying it on cause our subculture isn’t fashion but a way of life, I’ve started in 98 shortly before turning 15, i’m nearly 31 by now, and i’m still here. As I did, many others are doing and will do in the future. We keep the faith.

Thanks for the interview and thanks to all the readers that had patience enough to make it till the end. See you in the mosh pit!