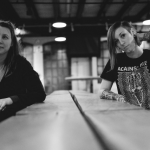 Your new record is called Feeling Disconnected, it seems to broach the issue of social alienation, which is present everywhere in late capitalism. How do you actually deal with that?
We all experience social alienation throughout our life and I believe how we deal with that is what can make us more respectful and accepting individuals. Unfortunately some people are just assholes and will forever feel the need to make people feel alienated, so it’s up to people like us to touch on these issues and continue to speak our mind when shit goes down so sometimes for us dealing with this issue is writing songs about it and sharing those songs with every person we play for. Everyone has the right to be respected and feel safe.

Also empowerment is a theme which can be found in nearly all songs on the new record. Do you write songs primarily for your selves or with other people on your mind?
Our songs are always primarily written for ourselves as they deal with issues we’ve experienced and been through personally, but in order to be a successful songwriter you have to speak to the audience. The songs need to be relatable to the listener in order for them to be engaged.

Your touring Europe for the 4th time in 1.5 years in April, including your last tour supporting Against Me! How do you feel about that?
To be a successful band these days I truly believe you need to be road ready at all times. We love touring Europe and we’re also excited to go back to UK for the second time on this run. We weren’t planning to be here this past December, but the Against Me! tour came up and we obviously couldn’t turn that down! Also, if you wait too long before returning to a city – anywhere in the world – people will forget about you, so you have to keep coming back! Luckily we love touring still so we’re not stopping any time soon.

What was touring with Against Me! Like?
Touring with Against Me! was a dream come true. We couldn’t have asked for a better group of people to be with to be honest, they are such an incredible band and equally incredible people, and it was a honour to share a stage with them 26 times now. The band and crew were extremely accommodating to us and I think they genuinely enjoyed our music or at least they were good at pretending, haha. It was very nice and humbling to get words of support from a band that we look up to so much.

As a female only band – do you enjoy being announced as that for putting an focus on non cis-male musicians or does that rather feel like being reduced to gender once again?
In my opinion the gender issue in music (and all industries) is a catch 22. We should all just respect each other as people and not base that on our gender identity, but if announcing us or pitching us as a female-fronted band may help us get into the hands of a wider audience or get us certain gigs where the promoter may be trying to diversify then I’m not opposed. As a female band people often want to put together “all female” nights and think they’ve come up with this genius idea, but really they may be part of the problem as well. I think it’s extremely important to have female representation on stage or at the venue because I believe it makes for a more comfortable and inviting atmosphere, so in that regard having us spoken of as a female band doesn’t bother me. This is going to be an issue we and all other women in every industry deal with for a long time until close-minded, sexist, assholes get over themselves.

Although you don‘t have a bass player when you‘re touring, you have a pretty tight sound on stage. How do you get that done?
We have never had a bass player and don’t have one on our new album, Feeling Disconnected, either. I don’t think having a bass player makes you a tighter band on stage, what makes that is playing a shit load of shows on the regular and that’s what we do. If we weren’t a tight band – most of the time that is – I’d wonder why we’re doing what we’re doing!

Punk is often confronted with the allegation being depoliticised. What would you say about that?
Mobina Galore have never been categorized as a political band because we don’t write political music. We touch on social issues from time to time, but mostly our music is influenced by our experiences in life and travel, not politics. I don’t think it’s fair to say punk music has been depoliticised because there are still tons of bands out there who focus their song writing on the political issues surrounding us, there are just so many more bands these days it may feel that they are being overshadowed and unrepresented. Radio and TV is so overly censored that maybe the younger generations aren’t getting hit with it like generations passed may have since programs that used to air on Much Music and MTV don’t exist anymore. Although we don’t sing about it we still have personal political views.

There‘s a pretty long list of Canadian HC/Punk bands which get hyped in Europe at the moment like I hate Sex for example – do you have any new recommendations?
My brain is now empty I can’t think, sorry haha.