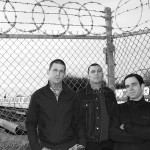 You are heading over to Europe in May to play a little tour. Is this you first time in Europe as a band? Are you already excited?

Bryan: Yes, this is our first time touring Europe as Hounds & Harlots and we couldn’t be more excited!

Greg: Personally it has always been a dream to go to Europe, I have had many friends go over on tour and come back saying how amazing it is! How great the shows were, how hospital the venues are and how fun the people are!

Did you have any special preparation for the tour? Or don’t you need any preparation as you are all touring old stager.

Bryan: Well, since Greg now lives far away from Cory and I these days we hadn’t played together in a few months. We had rehearsals the week before tour. We wrote a few new songs and a couple covers specifically for the tour.

Cory: Get some clean socks to bring on the road! Nothing is worse than a van full of stinky dudes and even stinkier socks. Practicing a lot before tour doesn’t always happen but once you play a couple shows in a row your mind and body are ready for more, it’s just a matter of adapting to things changing day to day.

Greg: I agree with Cory, CLEAN SOCKS! This was our first time in Europe as a band so I really don’t think any of us had any idea what to prepare for.

Your album „The Good Fight“ was released last year, not only on CD, but also on vinyl. Are you vinyl addictives or what was the reason for this step?

Bryan: Most definitely! All of us love vinyl. I hear the local record stores a few times a month. Originally we had no intentions of releasing the album on CD, just vinyl and digital. We’re glad we did though because there has been a large demand for the CD.

Cory: I was very excited to have the album come out on vinyl. We were stoked that someone wanted to put it out at all. Blackhole and Contra are great record labels and we are grateful to be a part of that. I love the sound quality that vinyl provides. In such a digitized music world it’s awesome that people still buy vinyl and support bands like ours. Check out The Ruckers berlin nights 7 inch, best vinyl I’ve bought in a long time!

Can you describe the creative process which lead to the album in the end? Who wrote the songs? All of you together, or do you have one creative mind?

Bryan: It’s definitely a collaboration amongst the three of us. Usually Greg or I comes to practice with a riff, chorus, or sometimes a skeleton of a song and then we all hash it out together. Greg and I write the lyrics.

Cory:I think we wrote the song Divisadero the first time we got together to practice actually. I guess that would make it our oldest, also one of my favorites. We put a lot of thought and time into writing the rest of the record and I hope it shows. Our friend Chris Arredondo from The Briggs produced the record. He was a big help in the recording process and had some good ideas. He even played acoustic guitar and piano on the song Stand Up. I think we all draw from a variety of influences in order to write our songs, which is why the album doesn’t necessarily fit into one genre of music. In the end it comes out how it comes out.

Looking back after a couple of month – are you still satisfied with your work?

Bryan: Very much so. We put a lot of hard work into this album

Cory: Yes. I never understand why some bands half-ass their recordings. If you are passionate about something and sharing it with other people, wouldn’t you want it to be the best it can be? We worked hard and enjoyed the process of making the music and recording it, if someone else can listen to it and draw some inspiration from it than that is more than we expected.

Greg: I could nit pick every little vocal part I did, or bass line I played, It can be very hard to just stop and say “thats it, lets move on” but all in all I am extremely proud of this record, and the response people have to it, now I worry will we be able to write a better record… but the new songs we have already have settled my fears!

Given the case that all critics would have blasted the album. What would your reaction have been like?

Bryan: Ha! Well, they didn’t! It wouldn’t have mattered much to me. I write songs for myself first and foremost. It’s pretty humbling though when you share your music with others and they not only enjoy it, but find meaning in it as well.

Cory: If everyone blasted the album and shitted all over it, it would have just made me want to do another one. Not so much to win someone’s approval but I think that negativity would have fed the creative process. I think most musicians, including myself, write songs for themselves. Like all artists, musicians create because they want to not because they have too.

Greg: Honestly I wasn’t sure anyone was going to understand this record or this band, it doesn’t fit nicely in a box. We took a risk because we believed in the songs and this band and just wrote a record that we wanted to have, not to please anyone.

Coming back to the beginnings of Hounds & Harlots. How and where have you met?

Bryan: We’ve all been playing in local Bay Area punk bands for 10+ years. We met each other from our previous bands playing shows with each other.

All of you have played in bands before the Hounds & Harlots. Why have you decided to join in the new group?

Bryan: To try something new and collaborate with new people. The three of us had recently found ourselves looking for other like minded musicians after our previous bands had broken up.

Cory: Because we all have been playing punk rock for such a long time it allowed Hounds and Harlots sound to come together quite easily. There are so many great bands from our area that we grew up listening to in the 90’s ( Rancid, Swingin Utters, Greenday, Operation Ivy) that I think we wanted to go back to our roots and start a band that was fun and captured that time period of punk but had a new spin to it. We all get along well too which is sometimes the hardest part about starting a new band or keeping one together.

Was it always your plan to play in a band and try to become successful with it?

Bryan: It’s always been my plan to write music and then share it with others. I’m certainly not trying to pay my bills playing in a punk band haha. For me, it’s all about having fun and doing something that I love to do.

Cory: For me we’ve already achieved success. It is all relative. We’ve got to see places of the world we would have never been able to see otherwise. Meeting people and having them welcome you into their home and give you food and put up with your noise for 45 minutes is the greatest experience that we will take with us from this band. I never expected to make money playing punk rock. I think that wouldn’t even make sense if it did happen. Getting in the van and worrying about money sucks but all those thoughts go out the window by the time you get to the next show.

Starting up a band is not free of risk. Did you have an alternative plan?

Cory: To be honest I feel like getting older has made me more interested in playing music and collaborating. When I was younger playing in bands everything seemed so unattainable but now it seems that much more realistic if you try.
Greg: I tattoo for a living… so I live by risk…hahaha! My art is how I feed my family. I dont know if I will make any money from day to day, but I am truly happy.

Can you live from playing music, or do you besides have boring regular jobs?

Bryan: Unfortunately not while living in the San Francisco Bay Area. It’s too damn expensive here! Yeah I have a regular job(s), stagehand, carpenter, and sometimes a shop guy at a tattoo shop

Cory: San Francisco is one of the best places to live in the world but it is also one of the most expensive. I work at a grocery store. Nothing special but it allows me to pay the rent and save money to go on tour. Got to buy drumsticks somehow. It’s tough taking time off to go on tour when you have a regular job. I’ve quit jobs to go on tour before.

Greg: You can live from playing music, but it would mean sacrificing everything and being on the road all the time. I already did that, now I would rather have fun playing music. I already risk my family’s security on my tattooing and art, and I’ve gotten lucky.

Many musicians have big record collections. Do you have any records in your collection you are not happy with or even embarresed about?

Bryan: Well, I think I still have most the records I’ve ever owned since I started collecting as a teenager but I’m not really embarrassed of anything in my collection. I have an eclectic taste in music

Cory: 90% of my records are punk rock. You might find a certain Madonna record hiding between The Adolescents and Negative Approach. Everybody needs a little Material Girl sometimes. I’d only be embarrassed if my girlfriend caught me listening to it.

Greg: NONE! I love them all, even the Elton John box set.

Have you already planned anything for the time after the tour? A new album? A new 7inch? Holiday?

Bryan: We’re heading into the studio at the end of summer to record a few songs for an upcoming 7″ or two. Maybe a split!

Cory: Invite us back to Europe!! New songs, we promise!!

Greg: Sleep, a haircut, changing lots of diapers & back to writing!

← Verlosung: CDs von The Prosecution
The Setup – This Thing Of Ours →