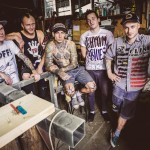 TrueTrash: You are starting your 2013 tour throughout Europe in March. Is there any city or venue you are really looking forward to play at?

Vojta: We are always looking forward to Marseille and Paris as we have plenty of friends around. But all the other cities are great as well. Also more west, more warm and sunshine which is really nice in March.

How do you get from one gig to another? Do you travel by bus? Who of you will have to drive?

We have a rental tour bus with sleeping lofts and 9 places for sitting. Mercedes Sprinter. It’s a typical van for tour rental services and for the bands like us. For last 5 years we did selfdrive, but this is the first tour that we have a driver. It is a big help on the longer tour like this (19 shows with no day-off).

Can you describe a typical „Pipes & Pints“ tour day – from getting up until going to bed?

We wake up every day between 10-12 am. For some reason there are no breakfasts on this tour so everyone takes care about his needs himself. First we have to load the van with the backline and merchandise that was in the club over night from the last show. Than we are on the road approximately 6-7 hours to another town. Someone is sleeping, someone is staring from the window, listening to music, watching movies, working at the laptop, reading books, studying. It is a lot of useful time when you want. 2-3 stops at gas stations for refreshment and toilets or quick walk arounds at the beach, nature or city from time to time when the drive is short. After arrival to the club we load in all the backline and merchandise, do soundcheck and dinner afterwards. Then there is usually some time to walk around the city or have a chill in the hotel or backstage. Show time is closer, so you are hanging around, talking to the people at the venue, watching other bands. Finally there is one hour of your show and you are giving it the best what ever is on your back. Usually it is a great gig what so ever. After the show we talk to the fans, stay for few drinks – or till the morning, someone goes to check the city by night or we go to sleep. Another day, another town, another country, same scenario.

As you are a touring band playing many live shows – do you have a anecdote from tour for us? Anything crazy that happened?

There are many crazy, funny or fucked up stories, but what happens on the tour, stays on the tour 😉 sorry mates.

You released your new album Found & Lost via People Like You Records a couple of month ago. How did it come to a collaboration with this label? Why haven’t you worked together with Wolverine records again?

Working with Wolverine rec was great and we are glad for this cooperation. The deal was a temporary licence for 1 record. Working with People Like You is another step on our way. It is hard for indie labels to compete with offers from big labels like PLY. With PLY comes bigger distribution, promotion, shows, new connections. It was a logical step and Sascha from Wolverine records was ok with that. After all it is good for everyone.

How were the critics for the new record? In case someone writes something really bad about you, how do you react?

Critics reaction was great and we are really glad for that. We even received prestige music award for genre music in Czech Repuplic, Andel 2013. We are never reacting to any bad criticism or even attacks. Of course we have not only lovers but also haters, like everyone else. Everyone has a right to express himself.

How does your songwriting look like? Do you have on creative mastermind, or do all of you sit together in the rehearsal room and for collecting some ideas?

So far we did the rehearsal room version. Usually our guitarist Tomas comes up with a riff and we all work on it. I am having some melodies in the drawer and singer Mike usually write his parts into the finished or half finished music. Our First album was all DIY and Found and Lost in cooperation with producer Darian Rundall. He helped us with the songs big time.

Let’s come back to the roots of Pipes & Pints: Was it clear to you from to very first second to found a punkrock band using celtic folk-punk elements?

It was all clear to use highland bagpipes together with punkrock music from the beginning. How far it is with folk elements or more something else, everyone has to consider for himself.

Many punkbands start up and have no clue how to play their instruments. What was first when you started up Pipes & Pints: The idea to found a band or the ability to play instruments?

When I came up with Pipes and Pints concept I had no clue how to play the bagpipes, but knew this is going to happen. After 1 year of playing bagpipes I started to look for the bandmates and few years later here we go. Everyone else had good experience with their instruments from other bands.

All beginnings are hard. Can you remember the first record you bought? Is there any record in your collection you are ashamed of?

One of first tapes I bought was probably some 90s disco music, soon followed with Nirvana, Cypres Hill, Judgement Night, Rage Against The Machine and from there to Offspring and Crew to go to deeper underground in upcoming years. The taste is changing concerning everything in your life not only music. There is nothing to be ashamed of. It is I progress and it is just what it is.

You are from the czech republic, the country with the highest beer consumption per head worldwide, and your band name contains the word „pints“. So we need to ask this: What’s your favourite brand of beer?

I think Pilsner 12°, Staropramen Unfiltered and Budvaiser Budvar Kroužek is the best. Lately my favorite brand is Radegast Birel. There are many good brands.

Are you one of those bands never being sober while practising or writing new songs?

I think we were never drinking in the practice room. Except few individual and very rare overnight party excesses. Some of us don’t even ever drink at all or stopped drinking at some point.

Do you have „regular“ jobs for the time you are not touring with the band?

Two of us have a regular job and two of us work as freelance production and/or management. The band is not that far to be able to live only from music and also it seams to be tricky to depend only on the band. There are so many other things to do.

Do you hang around with the other band mates in your free time, or are you happy if you don’t have to see each other’s faces for some time?

We are meeting at the shows in the home town from time to time. We are touring or practicing so in tense, so that there is very lack of time for your other friends or even families. Also our hobbies are very different. I am not sure what others, but after tour like this I am not hanging out at all. After so much of the parties and concrete cities I am looking forward to spend some time in the nature.

Coming to the end – let’s play a little game: We start a sentence and you complete it, ok?

I would never ever… say never.
I would instantly… surf the waves and wind.
In my next life… I would like to be conscious sooner.
If only I had known… it is not going to be easy I wont be surprised.
Sex, Drugs & Rock’n’Roll… is a dangerous mixture.