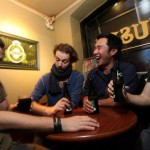 Steffen: We are Sky Architects, a 4-piece band from Aarhus, Denmark, playing what we choose to call Doom-Pop. Call it what you like! And to be honest we are a lot more people, as we always bring a lot of guests to our shows, and have a good crew surrounding us as well. But bassically, we´re 4 dudes who love all kinds of music.


What was your intention to do all on your own? Don’t you trust others?

We, as a band, are lucky enough to have two members who know the music industry wery well. So, we decided to make a plan for the album and see what dreams we had, and how we could realize them. It was really important that the people we worked with shared our hopes and goals, so that the music would end up in the right places. That´s why we decided that people had to accept our plan in order to work with the album. This means, that we have great people working with us now, who truly understands what it is that we dream of in Sky Architects. So yearh, we trust others, we just wanted to make sure we worked with the right people. The music industry is tricky, and it requires the right people, to do the right things.


Who inspires you? What are your favorite bands/musicians?

This is actually a very tough question. The best, and worst, part about this band, is that we all listen to very different music. For instance Benjamin and Thomas really enjoys classical music. Fast is definetly the post-rocker of the band and knows everything there is to know about this genre, and Steffen goes from John Mayer to Death Metal. But the metal-part we actually agree on – we enjoy heavy music, but besides this we´re really different. And that´s probably why we ended up calling it Doom-Pop. Many people tend to call us post-rock, but we don´t see us like that. Clearly we´re part of the community and love the music and the people – but if you put on a record with Explosions in the Sky and Sky Architects afterwards, you´ll realize that there is a long way between us musically. So i guess that´s our biggest strenght, at least for the people who understands it.


Your songs sometimes seem to be more than perfect. How long did you work on each song?

Ha, wow, thanks! That´s a big compliment, we really appreciate that! And not all reviewers agree 😉 But it varies a lot. Most of our songwriting is built on jam-sessions. Sometimes Fast or Thomas will come up with something at home and then we kinda build on it. But the end result is always very far from the initial piece. But yearh ,we work on the songs a lot. But sometimes it will only take a few hours to create a good track. But then there is months and months of rehearsals with adjustements in the details. We´ve rehearsed almost every single wednesday for the last 7 years or so, so that also means it´s easier for us to play together, as we have an easy approach to each others ways of playing.


At next you are touring across Denmark, and then heading to whole Europe. What can we expect from your gigs? Light Shows? Pyrotechnics? Something else?

Shit, that would be awesome! But for now, no. On this stage, i think it´s common for most bands to struggle with finances. A tour rarely pays much, so we´re lucky if the fees pay our travel-expenses in total. So we can´t afford none of that. Usually we like to bring guests on stage, a VJ, our own sound-tech and some carved figures. But i think we´re gonna do a smaller set-up, but just as effective. I hope we´re gonna be able to bring Asger (Known as “the dubstep DJ”) who can do great things to our tracks. But the fewer people we are, the more we turn it up on the “heavy” so we´re hoping that people will enjoy the shows just as much. We promise not to just stand around in our own litlle world. We´re gonna play with our hearts every night, and do our best to get everyone involved. It matters just as much every single time! It really does.

Yearh we know about this – there´s also Sunny Sky Architects, Sky High Architects and Mental Architects – and then of course “Architects” which is a great metal act. I guess it´s just one of those names. But regarding Sky Architect it´s been talked about before, and also between the bands, but it´s all good. Sometimes we get mixed up, but it seems most people know it by now. We looked into the time-perspectives once actually, and it seems we formed with our bandname like a month before them or something. So we´re very close and i don´t think anyone “stole” it from the other one. So for now, it´s just a good laugh when people mix us up – it happens 😉


What are your plans for future?

Well for now we´re focusing on getting to know our fans on the social medias, sending out albums and doing promo for the album, which includes reading good and bad reviews 😉 In August and September we play something like 12 gigs in Denmark, and in October it´s Europe. Besides that we´ll just see what happens. Different negotiations are happening, because of our show at SPOT Festival, so we hope that brings good things. But mainly for us, it´s all about the music and especially the people who listen to it. We´re so happy for every single person who “likes” an listens, and it´s really important for us to talk with as many listeners as possible, and we really hope to get to meet as many of you all as possible over the next year or so. And then some day focus is gonna be on the next album – but for now, it´s all about “The Promise of Tomorrow” and the fans.