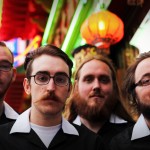 I am… Lee Jackson. I play drums for Fights And Fires from Worcester, England.

I would never ever… eat meat. The thought of it makes me feel sick.

I would instantly… take a job as a football manager over everything else in life.

In my next life… I would love to be reincarnated as a dog.

If only I had known… that buying Americana by The Offspring when I was about 13 years old would have inspired me into starting a band and ending up here! No regrets!

It is long overdue… that I moved out of my parents house. They are seriously great people though and are two of my best friends.

Sex, Drugs & Rock’n’Roll… I’m more of a rock’n’Roll, a couple of beers and early to bed kind of guy!

A band worth seeing live… Kills And Thrills. They are a band from the States that we played with in Weimar in 2011. I hadn’t heard them before and they completely blew me away.

The best show we ever played… This last year has been littered with awesome shows. I think the best was Biubstock in Geneva. It was an outdoor festival. We played with some seriously amazing bands, we had a really great crowd and it didnt rain, which is always a bonus.

The worst show we ever played… we have played some really bizarre places whilst being in this band. On one of our first ever tours, we played a town called Kutina in Croatia. The town was in the middle of the countryside and was still really badly damaged from the war. The venue had no toilet, had rats running around and was full of skinhead football hooligans. It was a really weird night with a really tense atmosphere. We played and got out of there pretty quickly. I think that is the only show we have ever played where I have worried for my own safety. It was definitely not a nice experience.

The best thing in our bands history… was probably our last European tour. We played some seriously great shows with some brilliant bands. It was such a good feeling being so far away from home and having people pack out rooms to see you and singing words back to you. Its the best feeling!

The worst thing in our bands history… we have been landed with some awful agents in the past that have been complete wastes of time. It drags all of the fun out of being a band when something like that happens but thankfully, now, we have some really great people helping us along the way and everything seems really positive, everybody is happy and we are really excited to get our new album released!

Looking back… I am really proud of everything the band has achieved and all of the great times we have had. Here’s to a positive future!