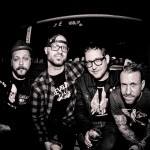 So, let’s start a bit general! Tell me something about Red City Radio, please!
Jojo (Bass): We’re Men, Hairy Men. Garret just started eating eggs about a year ago and if you consider how old he is that’s pretty recent. According to him they smell like farts!
Garrett (Voc/Git): According to farts! We’ve been a band since 2005 and now we’re still in it.

In the end of the last year you released your second record Titles. Is there anything special to tell about it?
Jojo prodcuced quite a bit of it.
Jojo: That’s something quite different, we decided to do it in Oklahoma city, that was a different approach.

Could you guys shortly explain Grizzly Pop to me?
It was kind of a joke.
Garrettt: Actually we wanted to call it beard punk.
Dallas (Drums): Somebody called us so and we liked it so we put it on a sticker on our first EP because we thought it was funny.

Talking about your songwriting, how do your songs develop?
Garrett: Usually it’s melody, then music, then actual lyrics. Sometimes it’s a quick process sometimes it’s a long process. Usually I bring melody and kind of an skeleton of the song and then we all have opinion on the blood, the muscles and the skin.

You’re known for your honest and genuine sound. Do you guys actually know how you manage to get all those feelings accross to your audience?
We’re good liars!
It’s really special to have people really enjoy the music and the lyrics and it’s really great to know we’re not alone in the way that we feel and it’s also really special for them to let them know they’re not alone, too.

How do you react to always being compared to Hot Water Music?
It’s a little annoying. We love Hot Water Music very much but we love them so much we listen to their music and to our music and can’t compare it.
Dallas: I understand where it comes from. When you play music you always get compared to other bands and we all love that band and I can think of worse bands to be compared with so I take it as a compliment.
Jojo: I think it’s kind of a lazy comparison, I find it’s like grabbing the biggest band of the genre we’re roughly in and that’s a lazy comparison although we’re less dark.
Garrett: I would say if you are listening and reading the lyrics buy the album titles and tell me one song on that album that sounds like Hot Water Music.

In the Wikipedia article about you guys it is written, that you had an appearance of some Sesame Street characters in some of your shows, stressing the importance of hand hygiene. Tell me more about that, please.
I do agree to that but who made that?
Jojo: Someone changed that as a joke and we saw it and laughed out of it. The original one was a very brief article, that was silly enough and now its ridiculous.

One of your EPs is called The Sons & Daughters of Woody Guthrie. In what way didWoody Guthrie influence you?
Garrett: In my opinion Woody Guthrie was like the first punk, travelling around in trains and writing anti-government songs. He’s a fucking redass dude from oklahoma with messages like This machine kills facists. I was pretty much thinking when I wrote that title that he was the father of Oklahoma, so all that musicians and arts people are the sons and daughters of Woody Guthrie.

And who and what would you generally name as your biggest influences?
Garrett: I think travelling, touring, meeting new people and wanting to talk about that is very important to me. And musically I would say the macarena.
Ryan: Whisky.
Jojo: I grew up listenign to Lookup Records, that early Green Day stuff.
Dallas: As far as my drumming goes I started emulating Tommy Lee and that hair bands. But then when I got older it was Fat Wreck Chords and now it’s Deryck Grant.

You’re on tour for some time now with venues ranging from Monster Bash Festival in Munich to small club-shows. Which kind do you actually prefer?
Jojo: We like them for different reasons, small packed clubshows arecrazy amd totally unleashed and big festival shows are awesome because there are several hundred people.
Dallas: Even shows with 20 kids can be really cool, we actually just want to have a good time.

Talking about festivals, what is it like to share the stage with bands you grew up with and that influenced you?
Garrett: It’s pretty amazing, hanging out with people whose music we’re listening to for a long time is just the best… sometimes.
Dallas: It was always kind of a goal to play bigger shows but at the same time you just feel like that kid.
Jojo: I often find my self in a situation saying to myself why the fuck am I here!
Garrett: Mat Skiba once fogot the lyrics for a song and asked people for the lyrics, I hit the stage and told him and he asked me to sing with them. The next day, we played together with them at Grozerock and they didn’t play that song but he told me to come up on stage and sing another song with them in front of all that people.

Is there a club/festival you always look forward to come back to?
Grozerock!

Do you guys maybe have some funny touring memories you want to share?
Dallas: We all pooped our pants on tour, except of Garrett.
Jojo: The last time we were in Europe, our old guitarplayer slipped and fell in the shower when he was blackout drunk and had an 2 inch diameter blood blister in the heel of his foot and took a needle to open it, then there was blood all over the shower.
Dallas: After that we instituted the rule, that Paul was not allowed to take a shower when he’s drunk because he actually fell down twice.
Garrett: Now that he’s not in the band anymore it’s just a house rule.

Could you please tell me a bit about touring life.
Jojo: Playing in a band is certainly a job, but it’s probably the coolest job in the world! Three days ago we drove vom Stuttgart to Torino, Italy, it was a 13 hour drive, we took our stuff out did the soundcheck and then had dinner and played the show but it was probably a 17 hour day.
Ryan (Git, Voc): Kent from Perdition (their support band on that tour) got a really bad case of food poisoning two days ago and played drums on all shows when most people wouldn’t even go to work, although he hasn’t eaten anything in about 24 hours.
Jojo: We all got a cold on this tour, those are sick days in Rock’nRoll.

What about playing shows in different countries? Do you guys realize some similarities or differences?
Garrett: It seems like people give a shit here and in America it’s a lot harder to find people that give a shit. Most kids in America like techno!
Jojo: Or they like that super screaming stupid music. But those differences aside, if you have a cool club show, it’s well attended and the energy is good you have nearly no differnce.

What do you do to fight hangovers on tours?
Dallas: Water! A very important thing I learned on tour is that you always have to stay hydrated. We all have a stay hydrated tattoo, except for Ryan, he’s too new.

Is there a band you would call a must-see live act?
Red City Radio!
Ryan: I would love to see Queens of the Stone Age!
Dallas: Manchester Orchestra was one of the best live shows i’ve ever seen
Garrett: There’s this new band from america, called SNAX

One record everyone should have listened to?
Willie Nelson – Red Headed Stranger, that record is so fucking rad!
Jojo: When it came out, there was nothing like it, no one had done a record like that, especially no Country record, because it was all Nashville based and all very industry oriented. Willie Nelson spent years in Nashville but didn’t make it, then he went to austin and did it and became the biggest Country artist in the world.

Joe Strummer once said „Without people you’re nothing“, I remembered that quote when I took a closer look at your lyrics. What’s your position on that?
All: Aggree!
Garrett: Joe Strummer is a fucking genius. That quote applies to anything, to music, to life, without people we were a social animal.